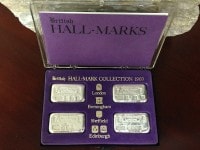 British Parliament founded the Birmingham Assay Office through the Hallmarking Act of 1773. The Birmingham Assay Office is the largest assay office in Europe, handling over 12 million assays per year. It has remained in current location since 1887 and has undergone several expansions since. Only 12 Assay Masters have served the office since inception, the longest having served 68 years.

The hallmark of the Birmingham Assay Office is the Anchor. Some records suggest the Birmingham and Sheffield Assay Offices tossed a coin for the hallmarks derived from the sign of “Crown and Anchor” tavern in London, where assay office founder, Matthew Boulton, stayed while petitioning Parliament.