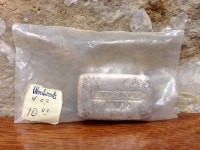 This 4oz series 3 example has become known within the Engelhard collector community as "the bar in the bag" after it was offered to auction in July, 2013. Originally sold by Woodward's Department Store, headquartered in Vancouver, British Columbia, this 4oz bar in original sealed bag with price sticker leads us to believe it was retailed in 1970 or 1971. Although Woodward's operated in both Alberta and British Columbia locations, we have historical record to suggest it was the Vancouver, B.C. location that originally sold the bar.

The bar was kept privately until offered in April, 2013, by All Nations Stamp & Coin retailer in Vancouver, B.C. and of course again offered to the collector community via public auction.

This example is unique in that the purity and weight stampings are opposite and further apart than those of other known 4oz mid-hallmark variety bars. A keen eye will further note that the purity stamping lacks the + sign and the absence of a "Bull Logo" affixed to the hallmark, despite its Canadian provenance. We believe this variety of bar was produced in Canada exclusively for Woodward's Department Store retail sale and in fewer mintage quantity than typical.