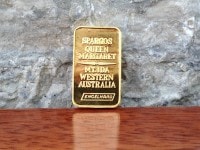 This 10 Gram bar was produced by Engelhard Australia in 1986 to commemorate the acquisition of Queen Margaret Gold Mines of Western Australia. We believe these bars were produced in quantity of 1000 pieces.