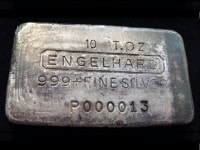 This rarely seen variety of 10oz ingot was sourced from a long-time collector who had originally procured the example shortly before the Hunt Brothers attempted to corner the market, leading to Silver Thursday in 1980. The collector had requested the bullion be sent to him as he did not want to take the chance the retailer went out of business. At the time, this was a rare request, so much so that he was required to remit an additional “fabrication fee” in order to attain them. They arrived from the Bank of Delaware and had remained in his collection until 2010.

Archives further suggest this variety of low serial number 10oz ingot was produced by Engelhard on short notice and in very limited quantities to satisfy the negligible number of delivery requests at the time. As such, we believe the estimated mintage of 1,000 pieces to be liberal.