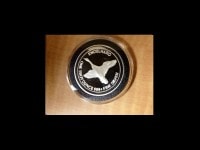 Canadian Prospector special release in proof finish. Originally issued in a velvet box with Engelhard ‘Triangle’ logo on the inside, registered July 10, 1987, though seen in use as early as 1985. Reverse design matches ‘Eagle’ logo that started in 1984, and research shows that the term ‘Canadian Prospector’ was trademarked by Engelhard in 1986. That suggests production between 1985-1986.