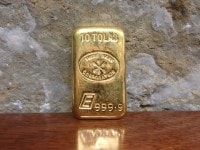 The Union Bank of Switzerland and Swiss Bank Corporation merged in 1998 to form UBS, the largest bank in Europe and second largest bank in the world. The three keys of the company logo represent “confidence, security, and discretion”

This ingot was produced in Great Britain and carries a 10 Tolas weight designation, a South Asian unit of mass, which equates to 3.75 troy ounces.