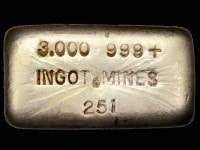 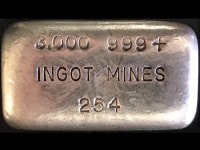 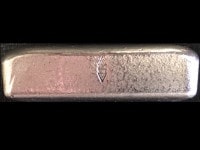 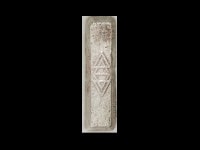 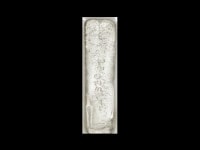 Einar C. Erickson, geologist, established the Ingot Mines Corporation of Las Vegas, Nevada in 1972. Unlike Erickson’s related Silver Diamond Corporation, archives demonstrate that Ingot Mines was an actual mining operation of claim groups Carrie Ann, Treasure Hill and Golden Ridge. Ingot Mines was involved in several aspects of mining, including a silver-copper project, a lead-zinc project of White Pine County, and discovery of ore in argenta open pit operations. The diamond shaped logo found on the leading edge was later used again on Erickson's ingots produced from the Diamond Mine project in 1978. Pictures of this logo as well as an example from Diamond Mines are also presented above.

Ingot Mines Corporation commissioned Engelhard to produce these 3oz class bars in an estimated 100 ingot mintage. We believe Engelhard produced them in 1972 and counterstamped them at their own production facility.